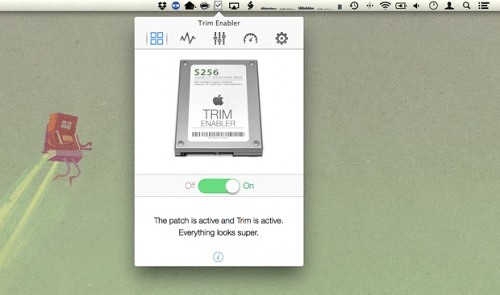 We were excited to hear about third-party SSDs for Apple products that supported TRIM, but now, with the latest update to the MacOS X (10.10) aka Yosemite. But, it looks like Apple may have spoiled that fun.

TRIM marks data to be deleted that was removed at the filesystem level. Normally, SSDs do not keep track of the blocks that are no longer in use. This is where TRIM enabled SSDs would come into play by  helping increase the life of of the SSD, and performance over that lifespan.

Apple introduced a new security requirement within Yosemite calked kext signing. Kext signing ensures that drivers under MacOS X (specifically in 10.10) are left unaltered or need to be approved by Apple. Since Trim Enabler, a third party application, unlocks the TRIM driver in third-party SSDs, this new security feature will now stop the app from executing.

This type of signing is similar to what’s in Windows, but unlike what Apple is doing, Microsoft still allows you to install unsigned drivers on a per case basis. Speaking to that, Cindori Software, creator of Trim Enabler, mentions that you can disable the kext signing under MacOS X’s Yosemite, but it is done on a global level. If you do disable kext signing, do so only if you trust other sources from which you may get your system drivers from.

Apple added this security change without giving notice about its potential effects on people’s systems. What could possibly happen if you have a TRIM enabled third-party SSD, and you do not disable the new security feature? Your SSD will become less responsive and eventually slow down, hindering your system’s performance and decreasing the lifespan of the SSD itself. Not cool Apple.