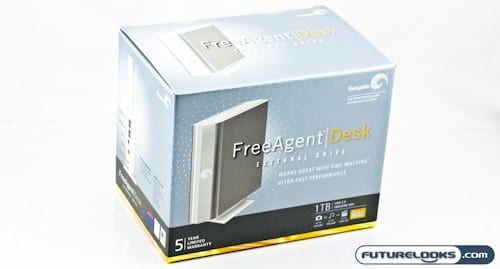 A couple weeks back, we checked out the Seagate FreeAgent Go 320GB; a drive that panders directly to the Macbook crowd. Today, we’re going to look at something that you can keep tethered at home with the iMac, Mac Pro or Mac Mini or keep it around for those big Time Machine backups. The Seagate FreeAgent Desk for Mac features 1TB of storage in a slick looking “Mac Like” desktop form factor.

If you really boil it down, it’s basically a standard desktop drive prettied up for the Mac Crowd. So what touches does it give the Apple user to choose it over any other drive in a box? Let’s find out!

While any external hard drive can technically be used with your Mac, the FreeAgent Desk 1TB Mac Edition gives you guaranteed compatibility right out of the box and comes pre-formatted for Mac OSX. This means that all you need to do is plug it in. This also means that Windows users need not apply as the Mac formatting makes the drive inaccessible to poor PC.

Connectivity to your Mac is done via Firewire 400, Firewire 800 or USB 2.0. While previous models of the FreeAgent Desktop Drives like the FreeAgent Pro 1TB model offered eSATA connectivity, it is missing in this strictly Mac edition. It’s a PC thing, not so much a Mac thing. 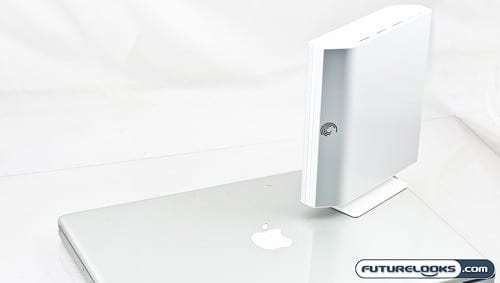 Inside the distinctly Mac styled outer shell is a 7200RPM Seagate 1TB drive. Along with that is Seagate’s Five Year Warranty and a retail price of around $199 USD or less. Other siblings include a 500 GB model and a bigger 1.5TB bigger brother.

Inside the box you get a manual, power adapter, and three cables to allow you took hook up the drive to any one of the aforementioned connectivity options. It’s worth mentioning that even the cables themselves are color keyed to the Mac demographic.

One thing that I did notice about the power adapter was the fact that not only was it compact (instead of dragging a huge brick behind it) but it also featured a removable socket adapter. This points to the possibility of using this drive in other parts of the world with just a quick switch of the head. I’m sure Seagate has these available at their parts hotline as they are not included in the box.