The CNPS10X Extreme Up Close 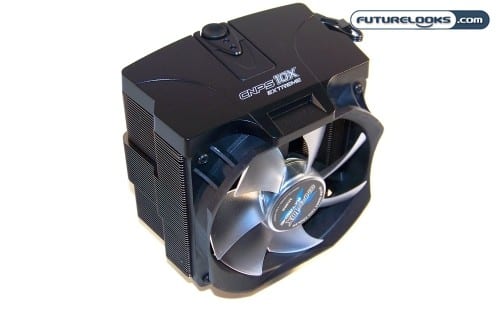 The 10X Extreme is a rather sharp looking cooler. Overall it doesn’t look or feel like it’s been fabricated from a tin can. Many CPU coolers have made the mistake of using low quality, thinner aluminum for their fins. It’s unlike many of the performance tower coolers in that it comes assembled with a mounted 120mm blue LED cooling fan of Zalman’s choice. Many enthusiasts like to use fans of their own choice. However, if the 120mm fan used here is of decent quality, we see no reason why it will ever be an issue even amongst DIY enthusiasts.

Overall, the 10X Extreme rather solid cooler. It’s roughly 5 inches wide by 6.25 inches tall x 4 inches deep. Most of that size comes from the fan frame which is actually more of a “cap” of sorts sitting on top with two small screws holding the fan in place. Basically, just for show but does add a nice finished quality to the product. 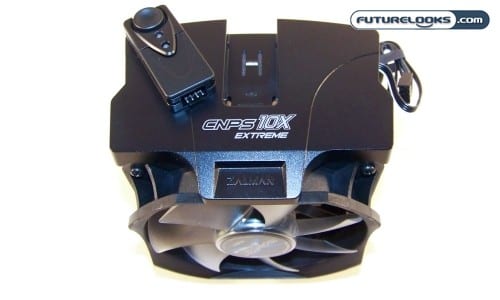 Mentioned earlier, the cooler contains a controller known as the PWM Mate. The unique thing about the PWM Mate is that it can be disconnected from the cooler and act as a wired remote when coupled with the included extension cable. Users can allow the Mate to hang or mount on the back of their computer case for easier control. It saves you time from having to open and close the chassis.

The entire cooler is made from or covered in what Zalman has dubbed “Black Pearl” Nickel Plating. We counted 5 full length U-shaped heat pipes running the full length and most the width of the cooler. The fins are noticeably thicker and make a rather tight fit, or connection, against the heat pipes than many other tower coolers. This should better help transfer heat from the pipes to the fins. 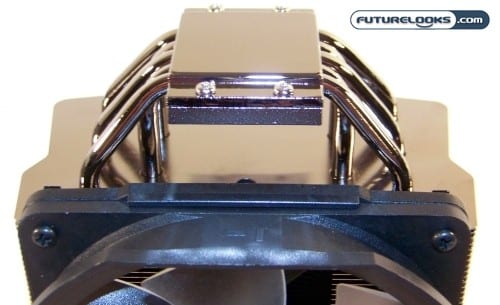 Despite appearances, we definitely noticed the superb mirror like finish on the non-copper colored base. Copper has always proven to be the best material for heat sinks. And, the mirror finish ensures that there’s maximum transference of heat from the CPU to the base as well as through the heat pipes.

We think you’ve patiently drooled long enough. Let’s see what this beauty can do.

First, our test system was thoroughly cleaned and prepped using Artic Clean’s products. To eliminate any variables between test coolers, a third party compound from Artic Silver 5 was used in place of Zalman’s thermal compound. No doubt that Zalman’s would be the ideal choice over any generic compounds, but we want to present the most uniform test experience.

The manual was clear on which LGA1366 components to use. The black bracket was a little loose even with the washer and screws thoroughly tightened. We figure the motherboard’s PCB is just a little thinner than the boards Zalman’s engineers used in development. While it shouldn’t affect performance, we didn’t want to take a chance, so an extra washer was added to each bottom bolt to tighten it up nicely.

The only sticky point was getting the top chrome fastening plate oriented properly while setting the cooler on the CPU. It can be tricky so take your time, eye the placement as best you can as you set it in place. After tightening the screws, it was extremely secure without any movement. Just what we like to see.

Our hexa-core processor is a beast of a processor. It can get pretty warm pushing any cooler to its thermal limits. If this performance grade CPU cooler can cool the Core i7-980X, it will easily cool any other processor available, including AMD’s upcoming Phenom II X6s.