This is the latest 3D benchmark from Futuremark. It’s pretty handy for validating our test system’s synthetic 3D performance. This benchmark will also tell you if your video card and/or drivers aren’t running properly. 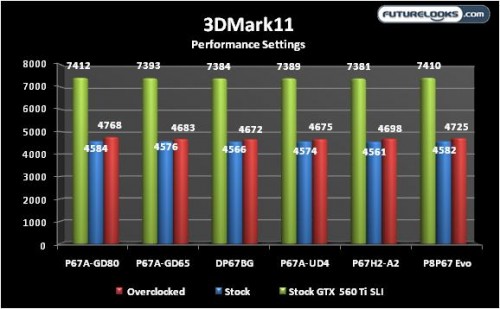 These results should please anyone looking for a potential benchmarking winner. Particularly with some more overclocking tweaks. It’s faster than the rest we’ve tested for sure, but synthetic tests only tell part of the tale in 3D. Let’s add an actual game title to the mix.

Since these are all NVIDIA SLI capable motherboards, if we didn’t make an excuse to play some games and run some real world benchmarks. Metro 2033 is definitely one of the toughest games to hit a system since the original Crysis. 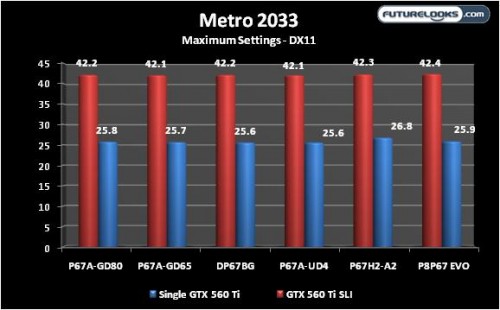 Results here are extremely close across the systems. Given Metro 2033’s extremely detailed DirectX 11 tessellation, we suggest two video cards when playing with resolutions of 1920 x 1200 or higher. Otherwise, you can overclock your processor and get up to a nice 15 frame per second jump as shown here. 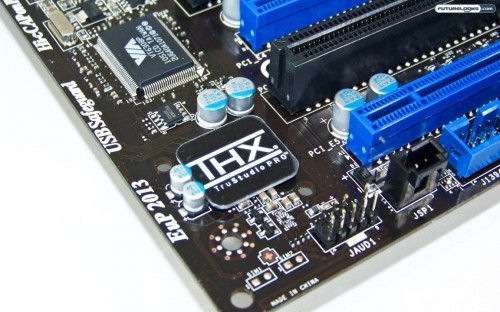 For objective testing, we used Rightmark Audio Analyzer to give us a definitive, mechanical rating of the audio solutions onboard. Having said that, we also needed to ensure that the human heart was satisfied with our own subjective listening tests through headphones. For sake of comparison, we threw a couple other boards with similar Realtek HD audio processors in. 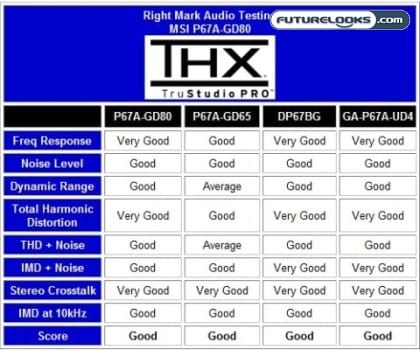 The audio test results were quite good overall. Most of the test results are affected by hardware implementation with a small portion by the software drivers. In a nut shell, the audio quality is pleasantly clear. Since integrated audio solutions are intended to cut down on cost, it doesn’t boast much gain so distortion sets in much quicker than a solution with better headphone amps. Otherwise, you should be pleased with the basic performance, especially when using good speakers.

The majority of boards have the same or similar baseline performance and besides overclocking performance, I/O performance can also vary widely depending on implementation. Things like a PLX controller here or a more clever component placement there can improve performance. 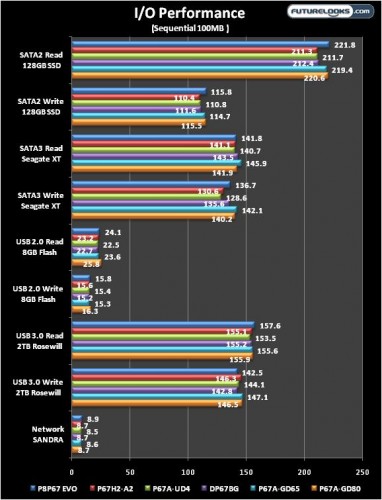 We’re not surprised to see similar performance results in some feature tests since these are all very similarly designed platforms. Upper echelon models with extra PCIe lanes can and usually do perform faster. Still, we can’t help but wonder why cut away two SATA6Gbps ports on the GD80, when they are present on the GD65?