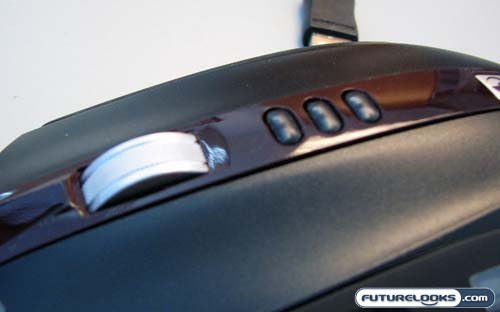 While beauty may be in the eye of the beholder with this mouse, there’s no doubt the button layout is useful and practical. Rather than the usual rubber coated plastic, Microsoft employed a metal scroll wheel with grip etched in. They also used the more desirable "clicky" scrolling action, instead of the smooth scrolling found on so many of their mice. The former style of scrolling gives some tactile feedback when scrolling through weapons. This allows you to select your various implements of destruction one at a time, rather than flying through them like the latter form of scrolling causes.

The three buttons below the scroll wheel are for DPI selection, which affect the sensitivity of the laser sensor and in turn how fast or accurately your cursor moves. Each button is programmable with a different DPI level, and pressing a button instantly switches the mouse to that resolution. The defaults modes are, from top to bottom, 400, 800, and 2000 DPI. Now this whole setup is preferable to the plus and minus buttons found on most gaming mice. Rather than having to waste valuable time scrolling through DPI settings, you can go from headshot accuracy to full movement in a matter of seconds. 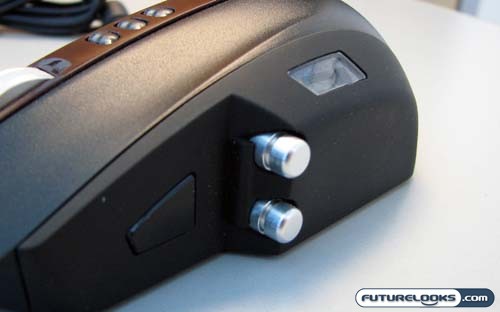 Now it should be clear by now that this mouse is not ambidextrous, and is meant to be used with your right hand. With that in mind I direct you to the left side of the Sidewinder Mouse, where your thumb would rest. Here you’ll find two silver buttons and a small black button. You’ll also find a first on a gaming mouse; and LCD display that shows in numbers the DPI level of the sensor. Forward of that are the two silver back and forward buttons, which are made of the same metal used for the scroll wheel. They are of course fully programmable.

Thanks to the design of the Sidewinder Mouse, the final button is rather difficult to reach without moving your entire hand. Luckily it’s only used for programming macros on the fly. Once pressed, you can record a macro of button combinations, and later use that macro to execute a spell in an MMO game or some feat of acrobatic destruction in an FPS game. 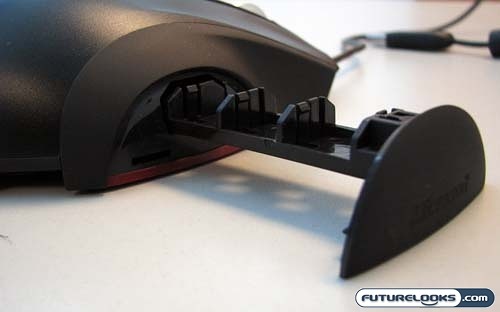 On the right side of the Microsoft Sidewinder Mouse you’ll find what at first appears to be nothing. However with a quick push on the button on the bottom, the cradle for the included weights pops out. Here you can insert up to 30 grams of weight, in 5 gram increments. This gives you full customizability should you want a heavy mouse that makes in presence in your hand obvious, or something with a more subtle touch.