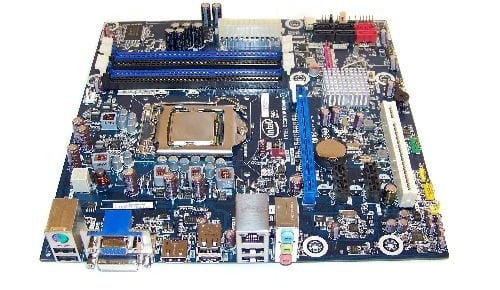 I know what you’re thinking. But hey, it’s a micro-ATX motherboard. The idea is simple: decrease the size, integrate the right performance, and lower the power consumption. Well, that goes for this particular platform. A full sized ATX won’t net you quite the efficiency.

However, it still offers the right amount of peripherals and expansion needed to build a capable home desktop, or a very capable Home Theater PC. This motherboard is fully capable all by itself whereas previous generations required a discrete graphics card and, in some instances a capable audio card.

Thanks to the extra space gained from eliminating one extra chipset co-processor, engineers were able to put the extra space to good use. There are 6 SATA3 ports backed up by 2 eSATA ports on the backside. That should be more than enough storage for your Home Theater PC. 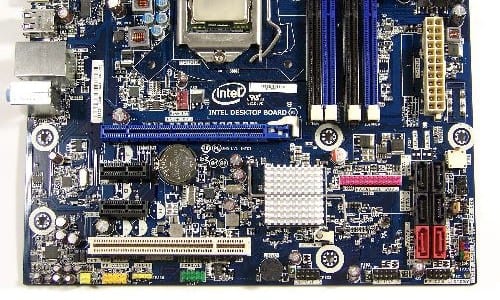 Speaking of audio, the motherboard contains an integrated Realtek ALC888S audio Codec. This little chip provides the 5.1 + 2-Channel HD audio which you’ll need if you’re to enjoy a decent audio experience via the HDMI audio out.

Unfortunately, the DH55TC doesn’t really support any overclocking especially in regards to the memory. The memory clocks can’t be changed at all. Plus, during testing, we had to sift through the on hand memory to find a kit that would configure the best automatically. Five kits later, we had our build.

Here are the components assembled thanks to some really excellent sponsors support.

Our Test System Will Consist of:

Ready for 10 pages of notes, graphs, benchmarks, and comments? Neither are we. We’re only going to cover the important tests that reveal what the CPU can do for you.

We’re looking for the closet comparison using a Core 2 Duo and a Core i5 750 with four physical cores and threads. Another aspect worth looking into is how well Intel Turbo will benefit the Core i5 661 CPU. At the moment, only a couple P55A motherboards support the entire Core i5 series including the 32nm parts.

The benchmarks and evaluations we’ll be using here are 3DMark Vantage, SANDRA Memory and CPU Benchmarks (to see how memory controllers compare), Video Encoding, Cinebench R10, and Crysis. Then we’ll round it off with a quick look at overclocking and power consumption numbers. 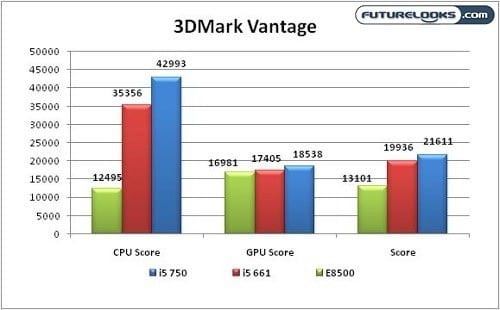 Well, what do you know. The 661 shoots a decent caliber round when coupled with a Zotac Geforce GTX295 video card. The Hyper-Threads heavily favor the CPU Score over the E8500. This alone should prove that even though it’s not in the performance list, it still has plenty of surprising power. 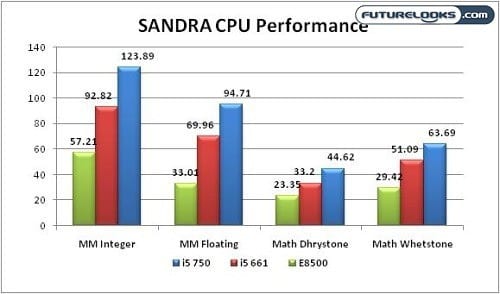 This benchmark gives us a sneak peak as to what to expect in terms of system performance. You may expect the 750 to blaze a trail past the other two, but keep on looking at the results because there are some surprises up ahead.