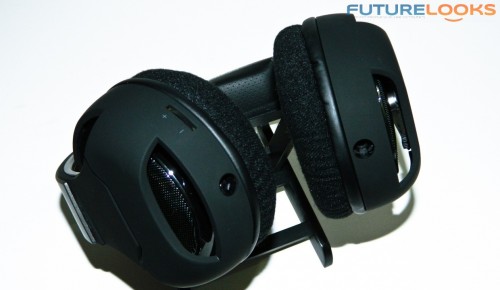 The speakers are connected via a removable analog 3.5mm male to dual-male jack. The single end plugs in to the base of either ear cup. This is a pretty great feature since some gamers like a different mic and cord placement. Naturally, the other two ends plug into your system’s analog audio main and mic out ports. It’s great to see Func provide the flexibility in this respect.

Audio is controlled with a thumb dial on the left ear cup. It’s not very big nor sticks out very far. The dial won’t easily be damaged from rigorous use. However, it will take a little practice getting accustomed to locating it from touch. The same can be said for the mic mute switch. It slides and clicks into place relatively easily, but may require two hands to activate. 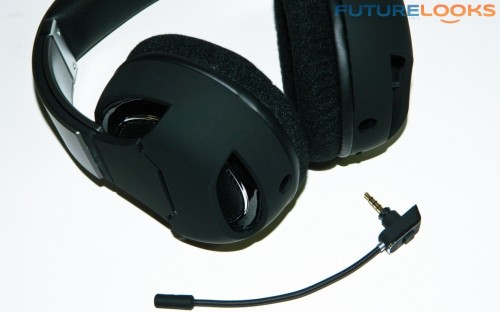 I have many different headsets and speaker sets that can sound very good, or very bad depending on the audio source. And, that is the key when testing audio products. For this round of testing, I chose to use audio CODECS that would represent the price range of casual eclectic gamers. An integrated Creative X-Fi on a GIGABYTE G1 Killer Sniper 5, Realtek ALC1150 on an ASUS Z87 Dexluxe, and an ASUS Xonar DG audio card were used as audio sources. The Sniper 5’s audio is very comparable to the lab’s X-Fi card which, unfortunately, isn’t working properly. Otherwise, these are effective common audio sources gamers should be using if they want to really hear their games.

Compared to other comparably priced headsets, the FUNC HS-260 offers a relatively decent audio experience. In default audio configuration settings, the HS 260 seemed a little flat and a bit like you were listening to audio coming out of a tube which is sometimes called the “tin can” effect. That effect robs the headset a bit of the mid-range frequencies, or voices commonly associated with RPG and MMOs. However, the headset sounds much better once you tune the EQ which often is the case with a lot of headsets out of the box. In fact, the headset actually produced some surprisingly solid bass during explosions and crashes in the RPGs and FPS games. 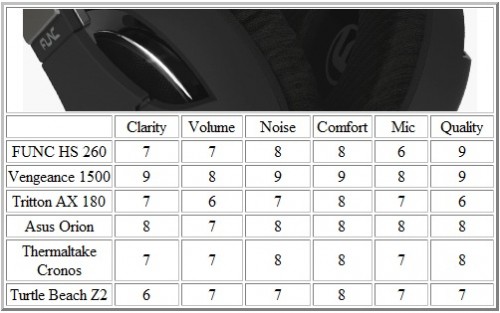 The mic on the other hand isn’t very sensitive and sounds flat. I checked the connection multiple times as well as swapped ear cup ports, but the results were the same. The mic settings had to be increased to 50% to be easily understood. Like many other analog microphones, mic boost is your friend. A redeeming attribute, given the mic design, is that ambient noise doesn’t make it in when chatting or calling out targets.

The FUNC HS-260 are the heaviest in the group tested. Despite the nice padding along the headband, the headset wears on you more quickly than the others. After about an hour, a small pressure point had developed where the pad makes contact with the head. The more you move your head, the more you will tend to notice this. The pad kind of comes to a curved point rather than spreading out like that of the Vengeance 1500, for comparision. 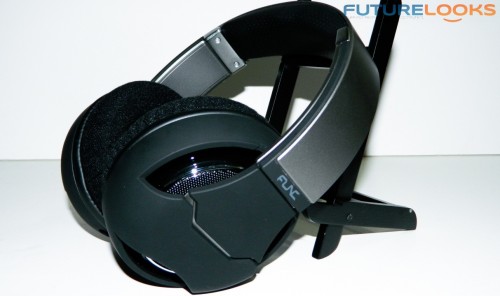 The FUNC HS-260 is a very attractive, yet good quality headset. It doesn’t exactly say ‘I’m a gamer’ but that wasn’t the goal of the design. There are plenty of gamers who don’t care for bright colors or gimmicky themes. Quite a few gamers appreciate style and sophistication. Really, all any gamer really cares about is whether or not the headset is a good, comfortable, design and whether the audio quality is enjoyable.

That said, the FUNC HS 260 seemed a little on the quiet side using both default integrated and external audio sources. That lower sensitivity robs a little mid range when playing MMO/RPG and FPS games as well as when listening to music. It’s possible some of the audio is escaping through the ear cup. However, a little EQ tuning transforms the headset providing a stout, clean audio experience. In fact, cranking the volume happily remedies quite a bit of what’s missing. In the end, the best results came from pairing the HS 260 with a capable audio source like the ASUS Xonar DG, which has its own built in headphone amplifier.

Ultimately, the FUNC HS 260 is a respectable gaming headset with integrated audio and an even better headset when paired with the right audio source. It is quite attractive, well made, comes with replacement ear cup covers, offers ambidextrous cable and mic connectivity, and only costs $79.99 US MSRP, which means it falls in a respectable price/performance void. All of which, are gamer approved items on the checklist, which gives us the ability to recommend them for your next online battle.