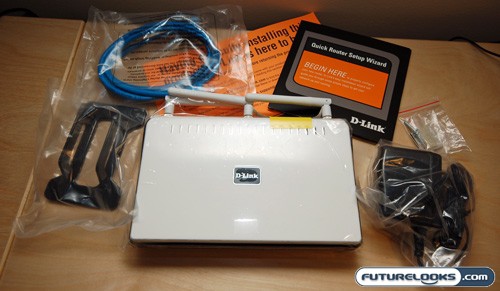 For a router this nice looking, it’s pretty much standard fare inside the box.  Of course you get the router, but you also get a set of screws for mounting it to a wall, an upright stand, power adapter, a CAT 5e cable, setup CD and a piece of paper telling you to put the CD in the computer and run it before plugging in the router.

Checking Out The Hardware 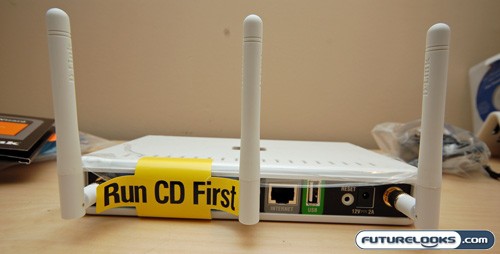 Just in case you haven’t gotten the picture yet, they want you to run the CD First, but before we do that, let’s get a quick look at the router.  Of course, the router features a triple antenna design that extends the range and coverage of the unit, but they are also removeable, allowing you to replace them with any number of aftermarket antennas that can boost its range even further.

The back of the router also features four Gigabit Ethernet ports and a port labelled specifically for plugging in your…Internet…like your cable or ADSL modem.  But of course, you won’t do that till you “Run the CD First”. Also on the back of the router is a USB port for plugging in things like USB flash drives or hard drive enclosures…so you would think. The port is used for Windows Connect Now which nobody uses. It doesn’t even allow you to plug in a printer and use the router as a print server. So basically it’s a useless USB port. To the far right is the master reset button and the power connector. 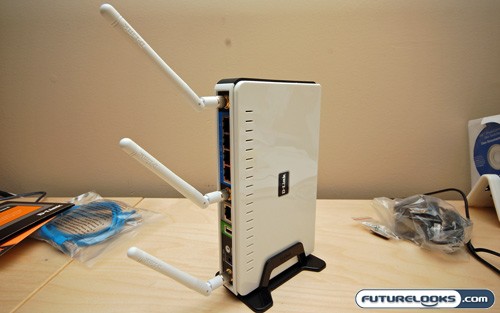 The DIR-655 can be placed either horizontally or vertically using the included stand.  The router even comes with mounting screws to allow you to mount it to the wall if you’re so inclined to. 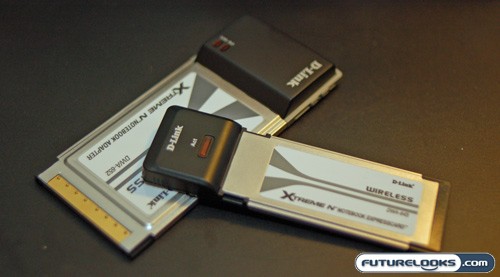 D-Link also provided a set of their Xtreme N Laptop network cards so that we can take full advantage of the extended range and full 300 Mbps of speed.  The come in PCMCIA and Express Card versions for both old and newer systems. D-Link also makes a PCI Express and PCI versions of their desktop cards, but we’ll be concentrating on the laptop versions because that’s where the action is.