Search
Home
Reviews
Silverstone RV05 Mid-Tower Enclosure Review
Silverstone has revised the RV05 enclosure to reduce size and cost using the space more efficiently. They've added some new features and cut down on others to make space for liquid cooling systems. In fact, it's footprint does more to focus on presentation while trimming off the internal fat.
Pros
Cons
2015-07-24
8.5Overall Score
Prev2 of 3Next

The Silverstone RV05 is indeed smaller than ever. The front naturally resembles a bird of prey of sorts. There aren’t any front bays to contend with or manage. It’s literally just a bezel. There is one vertical slot for an internal slim-model DVD ROM drive on the right side. We do recommend that you find a Silverstone branded one since their drives typically come with additional hardware that makes the install easier, rather than having to hunt for them if you pick one up not meant for installation in their own cases.

A bottom removable fan vent can be removed via the front for easy cleaning. Pop through the shots for a closer look.

The top of chassis is actually the IO area or back of the system because on a traditional case, that’s where you would find them. The venting allows the hot air to escape easily upwards, which is where hot air wants to go (Science!). A single 120mm fan also helps assist in removing more of the hot air out of the chassis. The front panel audio and USB ports have not been relocated and are still found at the front.

The back of the chassis has a single magnetic removable fan vent. That vent allows the PSU to pull air in to the unit and then out the top. Again, since warm air rises more easily, this is a good use of thermal dynamics.

While the basics are easily covered, there is one thing about the Silverstone RV05 chassis that I think most users would like standard which is a window. A chassis like this will be popular amongst enthusiasts. If the conservative German Companies can do it then I’m sure that this is no problem for the Taiwanese.

The inside of the chassis looks pretty basic thanks to the removal of all those unused optical drive bays. A single back mounted (quad) SSD/ (dual) HDD tooless cage is the only thing that gathers your attention. That’s perfect for a your 480-1TB SSDs which are far more affordable than ever, with very inexpensive 2-6TB platter for larger storage needs.

The bottom contains two 180mm Air Penetrator model case fans that draw cooler air in through the chassis bottom and pushes it directly up on to the hottest component coolers which are in your GPU and CPU. It will also blow past the motherboard perfectly as well.

The motherboard tray has many well machined holes placed around it for routing wires from the power supply. Instead of a standard CPU-cutout for CPU cooler access, there is an enormous open area which makes it easier to attach any style and size of CPU cooler on the market. The tray also accommodates SSI-CEB, ATX and Micro-ATX motherboards. Anything larger like an extended ATX or BTX will require a larger case from Silverstone. 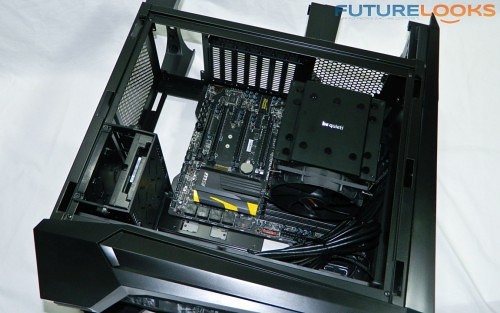 Given the inverted mounting design, it should be possible to assemble a rather quiet test system. These are the components used to test that theory.

Even though we used a reference NVIDIA GeForce GTX 980 video card, the fans don’t often spin up unless there is poor air flow. Again, this will put the internal air flow to the test.

Let’s put the parts in and start heating up this box!