The feature that differentiates the SideWinder X6 from many other gaming keyboards is the detachable keypad. You can choose to connect it to either the left or right side of the keyboard, depending on what kind of configuration and what genre of game you are playing. The keypad isn’t functional when disconnected, but when it is connected you can choose to either run it in number pad mode, or switch to macro mode and add another 18 macro keys to the existing 16. The keypad even changes backlight colour based on what mode it’s in. 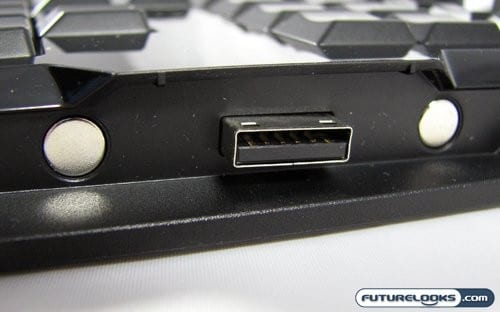 If you’re a big macro freak (as many MMO and RTS players tend to be), moving the keypad over to the left side makes for easy access to all the macro keys. This places it right next to the main column of macro keys. FPS players might even derive some use out of this, though the first 12 macro keys should be enough for most FPS titles.

When Microsoft was deciding what to use to keep the keypad connected to the keyboard, I’m sure they went through a whole litany of options. Thankfully they settled on what appears to be the simplest option, which is to use magnets. The magnets used are actually rather powerful, bordering on Neodymium or some other Rare-earth magnet in comparable strength. This is good as these magnets will definitely hold the keypad in place while you are pounding on the keyboard through victory and defeat. 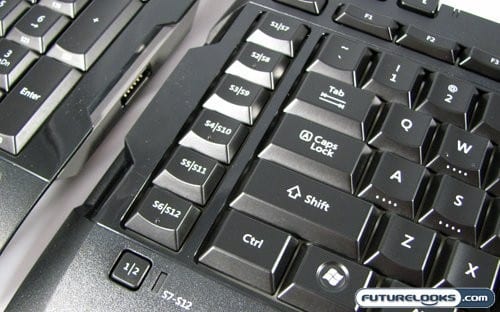 Though the removable keypad is the most noticeable feature of the SideWinder X6, it’s not the only benefit this keyboard provides to gamers. Microsoft has also included a whole host of useful function keys over and above the standard 104. There’s the afore mentioned macro keys; six of them to be exact. Though there are only six keys physically, the 1-2 switch below allows you to change their mode, giving you 12 programmable macros in total.

Microsoft added more function keys to the top of the keyboard, but they managed to do this without adding any additional bulk. This was done by slimming the main function keys, and placing the additional functions along the top edge of the keyboard. This makes for a much more slender package, which is only beaten by the Razer Lycosa in terms slimness. 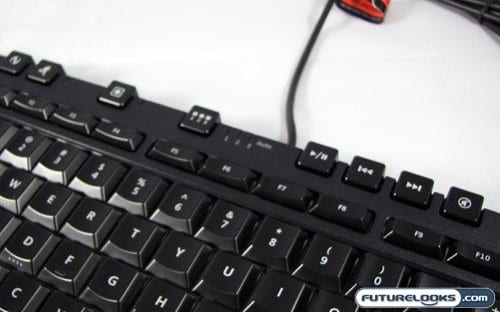 As for the function keys added, they are mostly to support multimedia features. However there are some notable additions. Reading left to right, we first have the launch key. Like the one found on the SideWinder mice, this key launches Games For Windows in Vista and the mouse software in XP. Next to it is Cruise Control, which when pressed with another key will continue the action of that key until Cruise Control is pressed again. Moving down the row we find the macro record button, and a button to allow you to switch between three programmable keyboard configurations (banks).