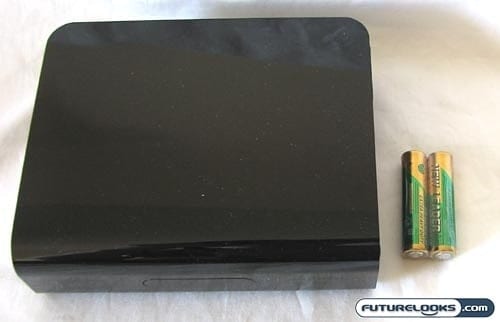 Compared to the Seagate offering, the WD TV is quite a bit smaller. This is largely because the WD TV HD Media Player does not have a slot built into it that is meant to accept a full-sized external hard drive. Instead, the interface is through a standard USB connection, so your flash drives and hard drives will be sitting outside of the media player itself.

Being so much smaller, it is quite easy to accommodate this shiny black box of multimedia goodness in your living room. Contrast this, perhaps, to using the media player function on an Xbox 360. I know a few people who use their 360s primarily for media playing. The Western Digital option certainly has a smaller footprint. 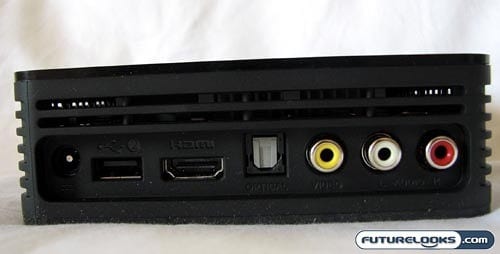 Swinging around to the back of the WD TV, you’ll find an assortment of ports and jacks. While there is no support for component video, you can take the generic standard definition route of the provided composite cable. You can, but you don’t want to do that.

That’s because the WD TV has an HDMI port, offering you true 1080p digital video and audio. This is utterly fantastic for just about any contemporary HDTV, since it’s just one cable. No mess, no confusion. If you prefer, you can also take advantage of the optical out for 5.1 surround sound audio when connected to your home theatre receiver. That’s a huge plus and a major advantage over some of WD’s competitors.

Aside from that, there’s a single USB port back here for your storage media and the port for the DC power adapter. 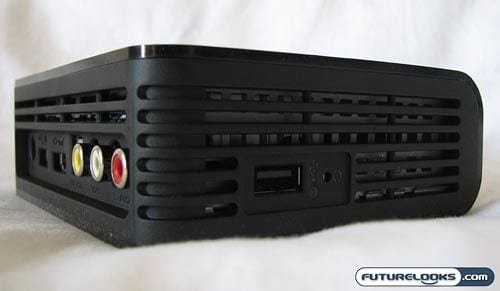 This is going to be a design feature that you’ll either love or hate. I thought that it was unfortunate that there is a USB port in the back of the WD TV, because this isn’t all that accessible if you’re going to be swapping flash drives on a fairly regular basis. That’s partly why Western Digital included a USB port on the side as well.

I like having dual inputs, but wouldn’t it have made more sense to have the second USB port on the front? Even the decidedly cheaper and less attractive media player from Hi-Den does it that way. That said, by not placing a USB port on the front, Western Digital is able to maintain a much cleaner look overall.

The main reason why you’d want to get something like the Western Digital WD TV HD Media Player is to watch video files on your massive HDTV, but it’s just as capable when it comes to photos and music as well. In fact, the list of file formats supported is among the best in the business, outdoing the Seagate FreeAgent Theater and even the Xbox 360.

For music, it’ll do MP3, WMA, OGG, WAV/PCM/LPCM, AAC, FLAC, Dolby Digital, AIF/AIFF, and MKA files. For photos, it’ll handle JPEG, GIF, TIF/TIFF, BMP, and PNG formats. Most of these other photo viewers can restrict you to just JPEGs.

On the video front, the WD TV can handle MPEG1/2/4, WMV9, AVI (MPEG4, Xvid, AVC), H.264, MKV, MOV (MPEG4, H.264), MTS, TP, and TS formats, including support for subtitles (SRT, SMI, SUB, ASS, SSA). The inclusion of support for MKV and MOV files is huge, especially for people who download content from overseas where the MKV format is much more popular.

It might have been my specific video file, but I tried one MOV file (from my P&S digital camera) and it would not recognize the audio in it. The video played just fine though, so I’m not entirely sure what happened. Something about the audio codec, I suppose.