We will start the real world testing with 7-Zip and Handbrake. These are free applications that perform some very common tasks for Internet savvy people. 7-Zip is a free open-source archive program designed to open compressed and/or encrypted data files. Handbrake is another open-source program that re-encodes common video files from one format to another. It is commonly used to convert video files on a computer to formats for portable devices such as smart phones and tablets. 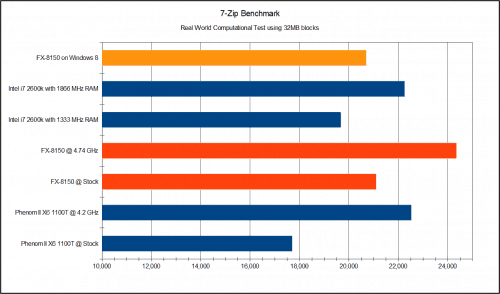 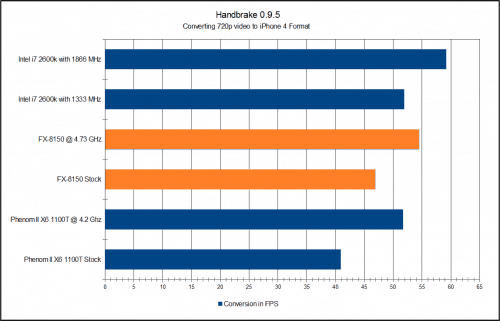 7-Zip is a well maintained program and always runs the most optimized code paths, so performance in this benchmark comes down to how well each chip handles it. This is clear as the FX-8150 maintains a lead over the 2600k with 1333 MHz RAM. When RAM speed is equal, the i7 2600k pulls ahead by about the same margin. Even though memory speed can affect this test, so can raw CPU power as overclocking provides uniform performance increases across all processors. It also puts the FX-8150 at 4.73 GHz in the top spot as it has the highest clock followed by the 1100T at 4.2 GHz with the second highest clock rate.

Handbrake on the other hand is not well maintained and has not seen a major update for some time. It runs on a very old compiled code that does not take full advantage of newer instruction sets. The FX-8150's eight cores holds a decent lead over its six core Phenom II 1100T brother and both fall behind the i7 2600k. Overclocking once again provides improvements, but it is not uniform. The 1100T gained 11 FPS from a 500 MHz over its Turbo mode; however, the FX-8150 gained only 7.5 FPS from a 800 MHz over Turbo mode. This is a case where the seemingly weaker integer core power comes into play in a real world case.

I would like to further examine the issue of where Bulldozer keeps stumbling over itself. For this I decided to use the 7-Zip benchmark. This benchmark decompresses blocks of data from a larger file and thus the workload is not uniform. As such the OS will assign the first available core for each block so the workload moves from core to core. I ran one test where I allowed this to happen and then another with the OS affinity locked to a single core on the chip. If the Prefetch and Scheduler on the chip is the weak point, letting the OS pick which core to work on should hurt performance. If it is the integer core that is the weak point, locking it to a single core should be slower. In either case, we know from previous testing the instruction set will not be getting in the way. 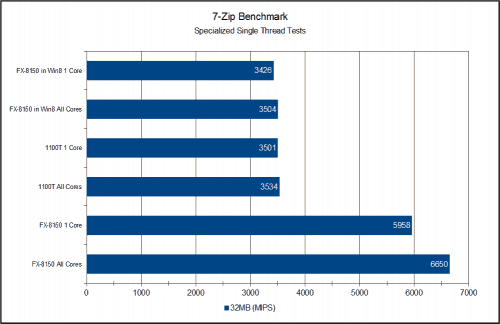 The result clearly shows forcing a single core to do the all the work hinders performance by 10.4%. The Prefetch and Scheduler have little work do when the affinity is locked to one core. When all cores are accessible, the Scheduler constantly has to check for idle cores to assign the work. The performance improvement could also be simple efficiency as the Prefetch and Scheduler could assign a different core a workload prior to the first block of work being complete on another core. This practice would give the next core a head start and cut down on CPU down time.

Also note there is a massive drop in performance for 7-Zip in Windows 8. I am baffled as to why this happened as Windows 8 is suppose to improve Bulldozer performance.

Now lets revisit the all important gaming performance. We will start with some older titles that span across all three major DirectX versions. The DirectX 9 and 10 test were done with Resident Evil 5 Variable Benchmark at maximum settings at 1920 x 1080 resolution. The DirectX 11 test is done with Alien vs. Predator on default high settings at the same resolution. 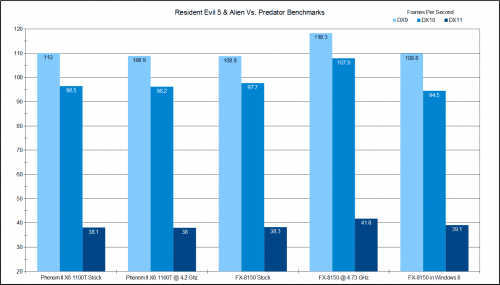 While the difference in performance is minor, it gives us a lot of information. First, overclocking the 1100T actually hurt its performance in every test. On the other hand, the FX-8150 has respectively large gains in every test when running at 4.73 GHz. At stock speeds, despite a clock speed and core count advantage, the FX-8150 falls just behind the 1100T in DX9. The FX does slightly better in both DX10 and DX11. Then when I switched to Windows 8 Dev. Preview  the FX-8150 shows gains in DX9 and DX11 with a drop in DX10.

Deus Ex: Human Revolution is one of the few games who were closely tied to ATI during development. It is only the second title I am aware of that was built from the ground up with ATI Eyefinity in mind. It is also unique as it was released only a short time ago and runs the entire game on a single thread. It is very very rare for a triple A title in todays market not take full advantage of multi-core systems. This test was done at maximum settings at 1920 x 1080 resolution, Vsync disabled and motion blur disabled. 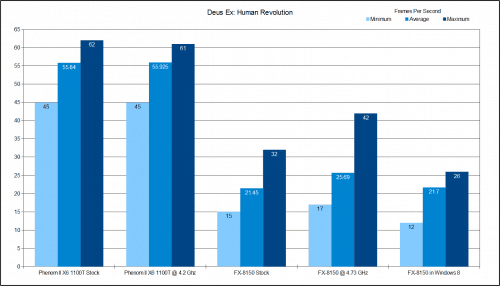 The FX-8150 is crippled by this game running a single thread on one core. It is completely unplayable and holding the GPU's performance back. While it could be the Bulldozer cores struggling with this type of single threaded processor, I am inclined to blame software. AMD provided figures for expected performance in this game and my scores are not even in the same ball park. I also notices some other sites did not have this issue either. I am not sure what is wrong here, but I witnessed first hand the choppy, broken gameplay with painfully slow menu animation.

Metro 2033 is notorious for bringing custom built machines to their knees. It is a very GPU heavy game, but also requires a decent quad core processor to run it smoothly on high settings. Once again these test were done with the maximum possible settings at 1920 x 1080 resolution. 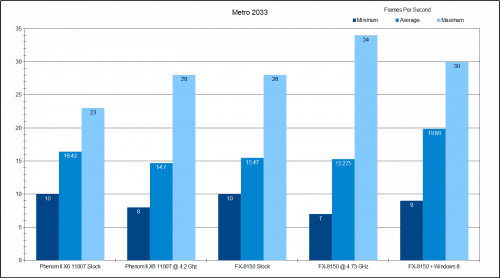 This time Windows 8 manages a victory as it brings up average frame rate by almost 25%. It also improves maximum frame rate. While I would normally say this maximum could be a fluke, the gameplay itself was much smoother in Windows 8 Dev. Preview. You can also see Metro 2033 does not take kindly to overclocking as it brings both minimum and average frame rate down for both processors. This game is also one of the occasions were the FX-8150 does not bring any additional benefit to the table.