Snapping In New Drives at Will 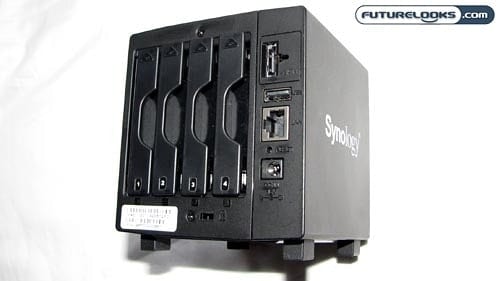 I’ve been using a Synology DiskStation DS207 as my primary NAS for some time and it’s been able to do its job, but it is a pain that I have to take it apart to get at the physical drives. Such is not the case with the DS409slim. Each of the four 2.5-inch drives take on a hotswap-like configuration, each getting loaded onto its own tray that can then be pulled directly out of the back.

You probably don’t want to do this while the NAS is still turned on, but it does mean that you don’t need any screws to take out a drive or two as needed. If you’re using the RAID5+Spare configuration, for example, you can yank the fourth drive and everything will continue to hum along as normal. 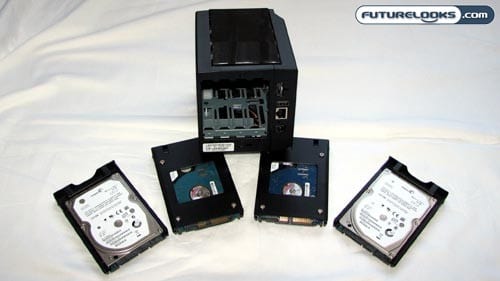 Another claim to fame for the DS409slim is its quiet and efficient operation. The single 60mm fan does a good job with keeping the temperature at a reasonable level. Using an infrared thermometer, I got an average of about 34 degrees Celsius for the surface with a maximum in the 38 degree range after extended file transfer use. 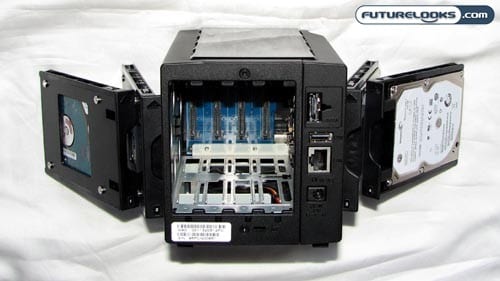 According to the official spec sheet, the DS409slim is supposed to use about 12 watts while idle and up to 19 watts while under load. Using a simple power meter, I found that intermittent access resulted in a peak maximum of 23 watts of power consumption. That’s higher than claimed, but still quite low compared to other NAS options using full sized desktop drives.

Your mileage will vary when it comes to performance though. For my highly unscientific test, I pushed a 100MB folder of MP3 files to and from the NAS over an 802.11g network via a D-Link router. Transferring from the NAS to my laptop took 108 seconds (0.9MB/sec) and from the laptop to the NAS took 124 seconds (0.8MB/sec). When I hardwired my notebook into the router, I got times of 11 seconds (9.1MB/sec) and 13 seconds (7.7MB/sec), respectively.

Expanding with eSATA or USB 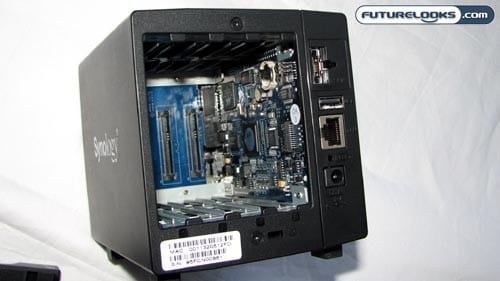 As with other Synology offerings, the DS409slim can also act as a server for your network printer. You also get a Download Station for BitTorrent, an Audio Station for streaming music, an iTunes Server to share music, and a Data Replicator to backup your computer.

You’ll also notice that it has USB and eSATA expansion ports. Anything that is plugged into these ports can then be accessed over the network as if it were a folder on the NAS hard drives. There’s also a “quick copy” button on the front that quickly copies the contents of a flash drive onto the NAS for quick file sharing. This could be handy if you’re transferring photos from a card reader.

Speaking of expansion, for those of you that like to upgrade things, we regret to inform you that the 128MB of memory onboard is soldered on. We checked. It’s not upgradeable.