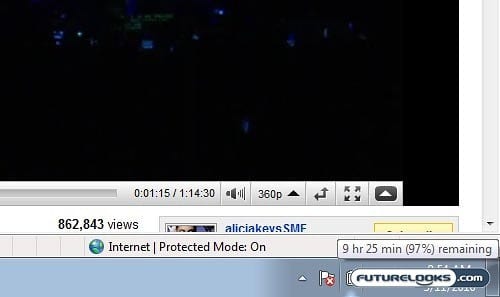 I always take battery life claims with a big bucket of salt and so should you. Samsung says that this netbook will keep you going for up to 11 hours on a single charge. That may or may not be true if you dial everything down, turn off all the radios, and do almost nothing.

To test the battery, I let it stream 480p video from YouTube, letting the clip loop over and over again. Brightness and volume were both set at about 60% with Wi-Fi turned on. With this configuration, the six-cell battery kept pumping for just under six hours.

That's pretty good, I'd say. By putting it through a heavier video streaming cycle, I was able to get a truer representation of how well this battery would hold up under real life conditions. Stick to more basic web surfing and you should be able to get some more time out of that battery. However, I don't think you'll get anywhere near the claimed 11 hours without major sacrifices in functionality. 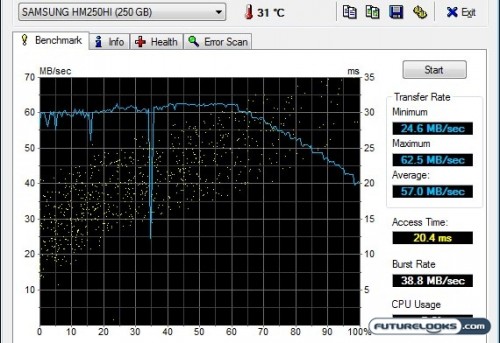 So, how does the Samsung N220 hold up against our usual slate of benchmarks? Running the included Samsung 250GB hard drive through its paces in HD Tune 2.54 yielded an average data transfer speed of 57.0MB/sec, a perfectly respectable figure.

You'll notice that the data speed, aside from one notable dip, stays very consistent for the first 60% of the drive, but it has a steady dropoff for the remaining 40%. Make of that what you will. 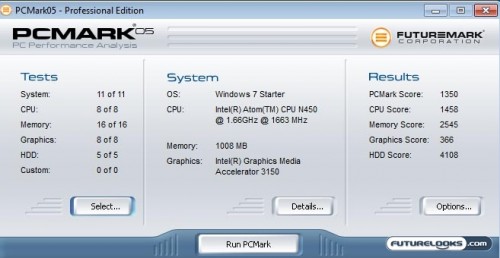 We also run the netbook through PCMark05 and 3DMark06 from Futuremark. PCMark05 gives you a good overall productivity overview while 3DMark06 gives you the goods on basic gaming functionality. I was able to complete all the tests in PCMark05, resulting in the overall PCMark score of 1350 shown above.

To put this in perspective, the Eee PC 1005HA Seashell was able to get 1570 PCMarks, even though it has an older processor. In fact, the 1005HA had a CPU score of 1559, compared to the 1458 achieved by the N450 in the Samsung. As expected, the Samsung N220 was not able to complete the full suite of benchmarks from 3DMark06. This is par for the course for netbooks in general, so as before, I removed the Batch Size Tests and got a score of 140 3DMarks. 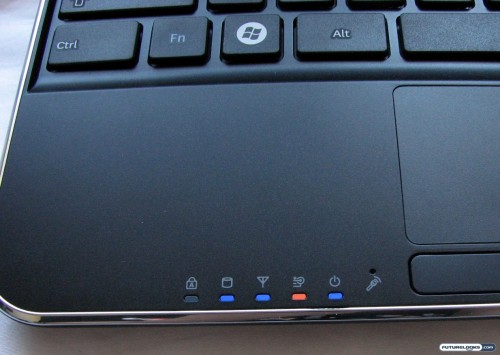 With all of the hullabaloo surrounding the new Pine Trail platform from Intel, I had high hopes for what the Samsung N220 netbook could offer over its predecessors and competitors. Ironically enough, it actually scored lower on benchmarks compared to Eee PCs powered by Atom N280 processors. That's pretty disappointing for the N220 and possibly other Pine Trail equipped netbooks.

All is not lost, however. The overall performance is still perfectly suitable for a casual netbook and I really appreciate the overall sense of quality that this device offers. The "island" keyboard is comfortable (just fix the right shift issue) and the overall choice of materials is good. You can definitely call the Samsung N220 a "premium netbook".

The Samsung N220 can be had for about $380 Canadian (after rebate), which isn't much more than the price of an equivalent N280 netbook, though the latter can be found as little as $250. Just the same, the N220 is a cut above in quality and the premium price is part of that for this N450 equipped netbook.