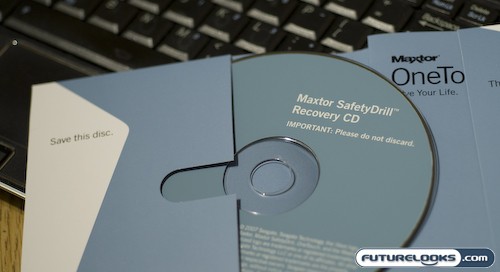 Next thing to do is to install the software. Although Maxtor gives you a CD, it isn’t actually necessary to use it to install the software, however, don’t throw it out yet. I promise to explain later. The drive contains the setup files for the Maxtor Manager software which gives you access to all the backup features including security and the Maxtor SafetyDrill software. Keep in mind that if you do format the drive, you’ll need to refer back to said CD for the installation files.

The Maxtor Manager software gives you access to your backup, software synchronization and security options. The security option offers you two levels of security: password level called DrivePass and files are encrypted and decrypted during drag and drop from the Encryption tool. 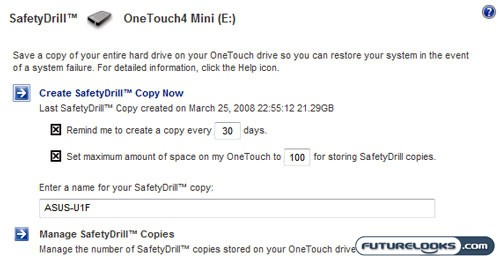 The backup and sync functions are pretty standard, allowing you to selectively backup files on your system on a schedule, however the star of the show if the SafetyDrill software. Through the options you can setup a backup interval to completely backup the contents of your hard drive and set a maximum allowable amount of space to allocate to this function. Once your backup is performed, in the event that your system is to go down in flames, you are able to restore your system to working order with the drive.

The software CD, which I mentioned earlier not to ditch, is required to allow you to boot the restoration software, and restore your system to a previous operational state from the backup. Maxtor does warn you to make sure that the CD does boot and that you are able to start the process. Typically, any problems with booting with the CD can be fixed by changing the boot order in your BIOS options. Having said that, I was able to test the CD successfully and get to the point where I was ready to restore my system to working order.

This software could also be useful for replacing a failed hard drive or upgrading to a new one, though if the target drive is bigger, it can only restore the same sized partition, leaving a chunk of free space. Luckily, Windows Vista can resize your partition for you in disk manager, but for users of other OS’s, you might need to invest in some disk management software to get all the space back, or you can just set it as a second partition.

No one likes waiting forever to backup or copy files from a slow ass drive. Although the OneTouch 4 Mini only comes with a 5400 RPM drive, we were hoping that it would turn out some decent numbers. We hooked it up to my ASUS U1F laptop and used HD Tune to see what kind of performance we could squeeze out of it. 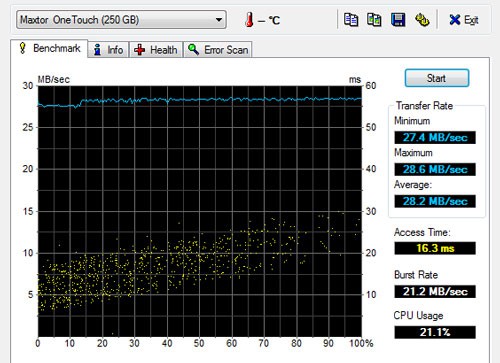 From the results, it’s clear that the only bottleneck is the USB 2.0 interface as denoted by the flat line of the graph. It turned out a burst rate of 21.2 MB/s with an average transfer rate of 28.2 MB/s. Although it isn’t un-characteristic of USB hard drives to have a high CPU utilization, the 21.1% could be problematic for weaker systems when in the midst of multi-tasking.