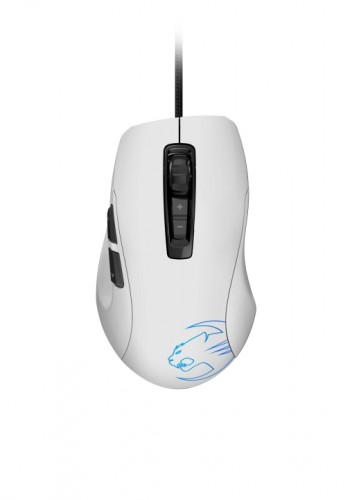 Yesterday, we posted about the new MIONIX 7000 gaming mouse. Today, we’ve got yet another gaming mouse to tell you about from ROCCAT.

The company has working on special release products all year-long, in celebration of what they call the “Year of the Kone” (aka their five-year anniversary). The entire Kone series was updated and received a new selection of awesome color options like red, orange and blue. To end cap the year, the final addition is the Kone Pure Color gaming mouse in Phantom White.

The Kone Pure series comes packed with a lot of great features. It still comes with the ultra high-end 8200 DPI Pro-Aim R3 laser sensor, Omron switches, support for Easy-Shift[+], Easy-Aim, and ROCCAT Talk. It is everything you need in a great gaming mouse plus the great features from ROCCAT. Now it comes in a color that will match that white case you just bought.

The ROCCAT Kone Pure Color series are limited Edition so you need to get yours ASAP. They are all, including the new Phantom White edition, available right now for as low as $64.99 but only while the supplies last.

If you plan to get one of these mice, today is the only option. This could also be the perfect mate for the BitFenix Phenom case we are giving away. Full press release below.

December 2, 2013 – ROCCAT today announces the availability of the Phantom White variation of the limited edition Kone Pure Color. Like the original Kone Pure, the Color edition features a high-end 8,200 DPI Pro-Aim R3 laser sensor and high quality Omron® switches. With features like Easy-Shift[+]™, Easy-Aim and ROCCAT Talk®, the Kone Pure Color is a powerful weapon in the hands of gamers fighting for point-streaks, lanes and bases. It is one of a series of limited edition products released over the course of 2013, which marks the “Year of the Kone” – celebrating the five-year anniversary of the Kone series. The Phantom White variation of the mouse follows the Inferno Orange, Hellfire Red and Polar Blue Kone Pure Colors, as well as the Kone Pure Optical.

Five years later, known for its powerful performance, the Kone series is one of the most successful gaming devices in the world. Although the Kone series has set new standards for gaming mice, the evolution will continue.