There are so many portable devices out there from smartphones to tablets. One limitation that many of us are starting to run into, even with the limitless expansion of the cloud is physical storage space for our photos, cat videos and files. But what do you do when you continually have files so large, that space continues to be an issue? Or, more simply to the point, what if you just like keeping files on something else but would like a simple way to access them without having to suck up the data on your wireless plan through the cloud?

Patriot Memory’s Gauntlet Node wireless enclosures are one of those answers. They come in two models: One that lets you install a 2.5 inch drive of your choosing and one that comes with a 320GB 2.5″ platter drive. Both offer WPA wireless secure access and offers an internal 5.5 hour battery. Let’s put them to the test to find out if the user experience is worth the price of admission!

As we mentioned, the main difference between both model Nodes is simply that the 320 comes with a 320GB platter drive and the other is empty. Otherwise, the features and specifications are identical right down to the screws. This allows both DIY and non DIY users to get what they want from Patriot, rather than going elsewhere.

It’s got all the right specs in all the right places on paper. It also uses the slightly less expensive SATAII interface since SATAIII speed would be wasted over WiFi, however, the USB 3.0 port could use that extra speed. For the most part, the device is intended to be accessed wirelessly and that’s what we’ll need to concentrate on.

Overall, it’s nowhere as slim as a smart phone or other competitors like the Kingston Wi-Drive, but it’s plenty small enough to fit in your tech bag or brief case and offers quite a bit more storage (and storage options) as well. Retail price for the Gauntlet Node is $99.99 US while the NODE 320 comes in at around $179.99 US. Since many of you are DIY, we already know which option appeals most to you. 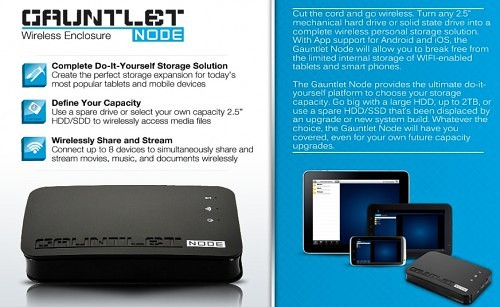 The Node supports some audio files as well which includes AAC (no-DRM), AIFF, Apple Lossless, Mp3, and WAV. Yes, basically these are all well known common Apple/iPhone files but they also work on PC as well as other WiFi connected devices like Smartphones and Tablets via the browser or the Gauntlet Connect App on iOS and Android OS.

The Gauntlet Node Up Close 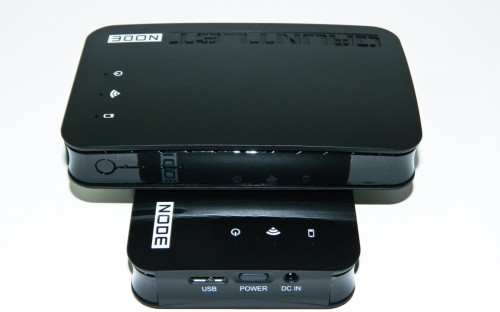 The Gaunlet Node is pretty simple when it comes to design. On one end you’ll find the USB 3.0 interface port (which requires a slim USB 3.0 cable), power button, and DC power port. The power adapter is fortunately pretty small and not too bulky if you need to take it with you. However, the slim USB 3.0 cable is less common and if you were to lose it, you lose the ability to connect it to your laptop or desktop computer. Replacement cables are hard to come by at your local computer store.

The top of the Node has a power, wireless, and battery LED indicator. The battery is red when charging and green when charged. The WiFi blinks when there is network activity though it’s just too bad there’s not battery level indicator. A small power button is built in to the side.

You don’t really have to worry about heat since small drives rarely get that warm, but there is venting around both sides, top and bottom, just in case. 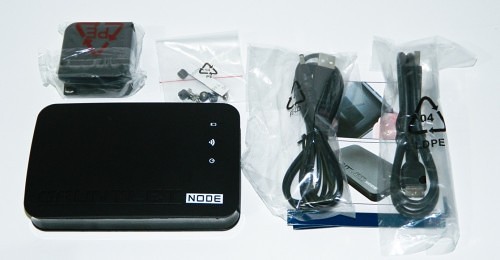 The accessories are exactly the same in both retail boxes. Besides the Node enclosure itself, you’ll find documentation, a collapsible USB-to-DC power plug, USB power cable, slim USB 3.0 cable, and a small bag of screws which includes two black replacements for the Node lid itself in case you lose one or two. There are four small rubber grommets that fit four chrome screws which attach to the side of the 2.5″ storage drive. They hold the drive in place so it doesn’t rattle around inside during transport.

Let’s see how the setup and user experience is.