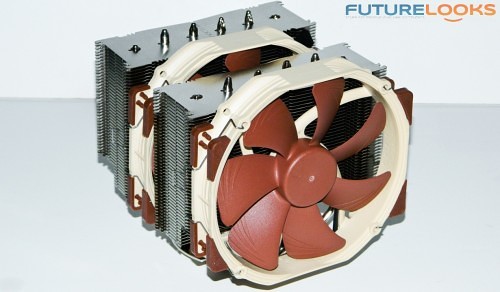 Content creators and power users have never had CPU processing power so productive like we do today. Thanks to the Core i7-4790K Devil’s Canyon‘s 4.5 GHz top turbo frequency and Core i7-5960X Haswell Extreme‘s eight cores, there doesn’t seem to be anything that a desktop computer can’t handle. However, that kind of performance generates quite a bit of heat. And, if there’s one thing we enthusiasts shouldn’t have to tolerate is an overheating flag ship Intel Core i7 processor.

Noctua has been engineering some impressively clean and efficient CPU coolers designed to manage the hottest processors. Their epic large Noctua NH-D14 cooler boasted dual radiators setting many records. The next natural step was to take that design, couple it with quieter cooling fans and update its physical thermal controlling features. That step is the Noctua NH-D15. It’s a well machined high quality nickle plated aluminum CPU cooler that promises you there’s no CPU that it can’t cool. Let’s put it to the test! 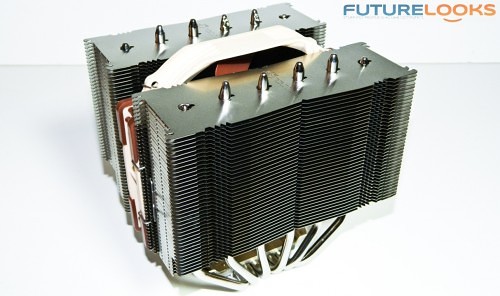 Sometimes, it just makes sense to take something as award winning as the original Noctua NH-D14 and continue perfecting it, which was seemingly, the goal of the Noctua NH-D15. Instead of starting from scratch, it was taken back to the lab for rethinking. That also included updating to more attractive-ish cooling fans. Here is a list of the features the NH-D15 offers:

Compatibility includes any LGA 115x CPU, LGA 2011 and AMD processor. What isn’t mentioned is that Noctua will send you a free adapter kit for the next generation CPU, whenever it appears, as part of their awesome after sales service. This means you can keep using their coolers from CPU generation to CPU generation. That’s always made their coolers a good investment alone.

Pricing for the Noctua NH-D15 along with its slightly slimmer physique, improved base, rounded better looking fans and contemporary look, starts at around $100 US, which puts it at the top of the price spectrum. The question is, whether it’s worth the money, especially since so many All-in-One liquid coolers sit in this price range. 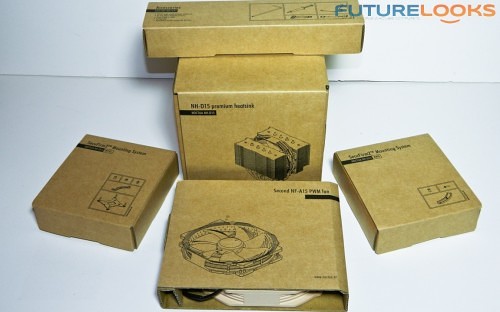 The Noctua NH-D15 cooler offers one of the most complete bundles ever seen to date. The quality accessories are separated in to individual boxes which is a nice organized touch. It includes the second Noctua NF-A15 PWM fan as well as the SecuFirm2 mounting systems for both AMD and Intel. 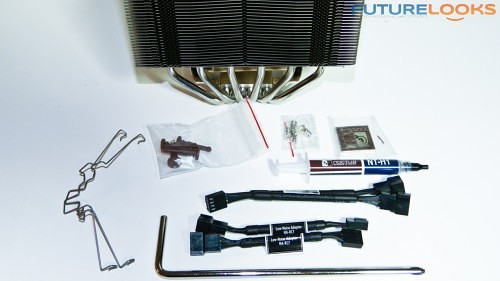 There is also an accessories box that contains the fan wire hooks, Noctua NT-H1 thermal paste tube, Philips tool and two Ultra Low Noise wire adapters and also includes a Y-splitter for connecting the two fans to one PWM controlled header on your motherboard. Both brown rubber fan pins and chrome screws are included in case you want to mount one of the unused fans some place else in your case. 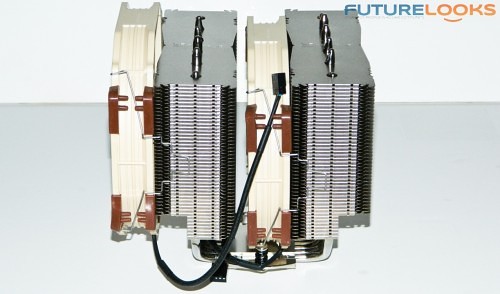 The Noctua NH-D15 doesn’t quite share the same square design of the NH-D14. Instead, the radiators are slightly slimmer. Both sides of the bottom outer edge fins are machined up to allow for taller RAM modules. The features state that most any RAM modules can be used in single (center) fan configuration. However, moving the second cooling fan to the opposite side of the heat sink also would work, if you have the space. 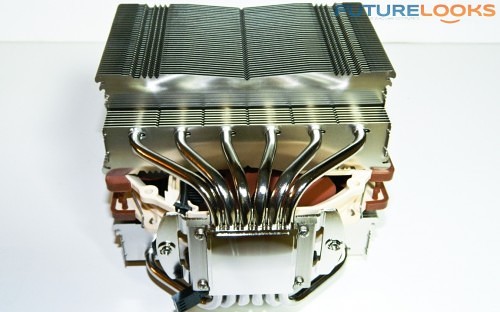 The bottom nickle plated base is well polished and slightly convex to create a very secure connection between a CPU’s aluminum cap (IHS). Some of them aren’t very straight which is why thermal paste is very important. However, the Noctua NH-D15’s base fills in that gap requiring less paste in our lab tests.

Let’s get a system built and put the Noctua NH-D15 to the test against some worthy competitors!