In case you haven’t already figured it out, rhythm games have become remarkably popular on just about every home video game console. In roaming my way through E3 Expo 2009 in Los Angeles, I made it a point to see the newest additions to the famed Rock Band and Guitar Hero franchises from the two biggest players in the small plastic instrument genre. And they did not disappoint. Just as we rounded up some new fighting games, let’s see what’s going on with some new rhythm games. 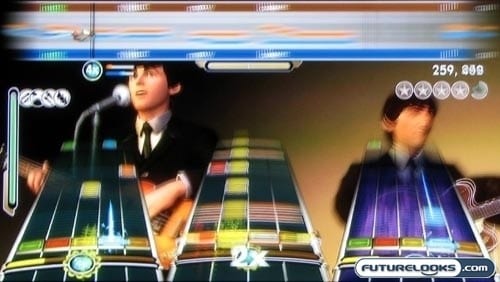 I wouldn’t say that I dislike the Beatles, but I’ve never really considered myself to be a huge fan of the Fab Five either. So, when I first heard about this Beatles-specific version of Rock Band, I wasn’t all that interested. I figured that it would be just another themed song pack, not unlike the versions of Guitar Hero and Rock Band that focused on groups like Metallica and Van Halen. As it turns out, Harmonix and MTV Games actually implemented several new features for The Beatles: Rock Band.

In previous versions of Rock Band, you would have to back completely out of the menu and go into the options section to activate No Fail Mode. This can be a real pain when you’re at a party and the newbie just wants to try one song. Addressing this, The Beatles: Rock Band lets you toggle No Fail Mode right from within the band creation screen. Also, players who choose the Easy difficulty setting will always be on No Fail.

The developers also received feedback indicating that gamers wanted all the songs to be unlocked right out of the box. It can be very time-consuming to go through the entirety of the Beatles’ career just to get your favorite song. So, all the tracks are immediately unlocked in Quickplay.

It’s also interesting that you can have six players enjoying The Beatles: Rock Band at the same time. There are still the same three instruments, but you can have three people on vocals in harmony. They’ll actually have semi-separated streams for vocals, making for a Barber Shop Quartet (Trio?) like experience. 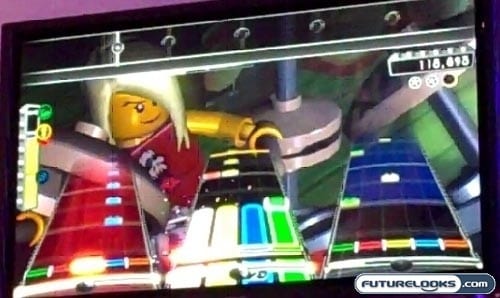 Maybe you don’t like the Beatles. Maybe you spent your childhood with a bucket of plastic bricks, putting together epic castles and interstellar ships. We’ve already seen several games make the jump into the Lego world, like Lego Batman and Lego Star Wars, and now they’ve done the same with Rock Band with the appropriately named Lego Rock Band.

You don’t get to control the little yellow-headed mini-figs, per se, but they take over the place of the regular Rock Band participants. This makes for quite a funny appearance for Rock Band, but that’s not where the Legofication ends. The notes coming down the highway, if you look very closely, are not solid bars; they’re little Lego pieces themselves.

The track list is meant to be “suitable for younger audiences,” fitting in with the overall Lego theme. Rock Band songs have always been censored for language, but I guess they tackle the messages in the songs too. Among the songs announced thus far are The Final Countdown by Europe, Kung Fu Fighting by Carl Douglas, and So what by Pink.

Here’s a quick HD video demo of the game in action:

Lego Rock Band is slated for release this holiday season for the PS3, Xbox 360, Wii, and Nintendo DS.