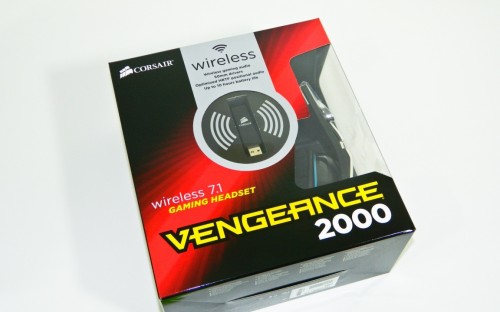 Wireless keyboards and mice are still the most commonly used peripherals. However, wireless headsets have slowly become very popular with both PC and console gamers alike despite their increased cost over regular wired headsets. CORSAIR, better known world wide for their Dominator GT memory and Force GT SSDs, took a bold step in launching their Vengeance Gaming headsets last year. They recently took an even bolder step by launching their Vengeance 2000 Wireless 7.1 gaming headset.

While their Vengeance 1500 5.1 Gaming headset has done a great job of seducing our auditory senses, the Vengeance 2000 Wireless 7.1 Gaming headset takes it a couple “channels” further. The real challenge is transmitting all that considerable audio data efficiently, accurately and with the least amount of latency. Is their wireless performance just as good as the wired? That’s what we’re “hear” to to find out! 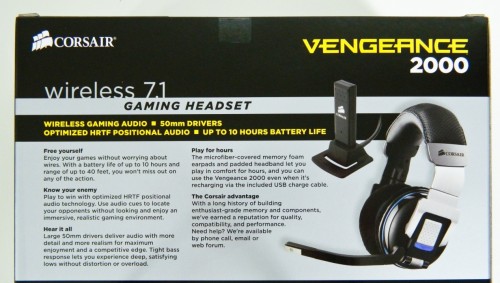 At a quick glance, the headphone frequency response suggests that it provides a decent low 20Hz bass frequency and high 20kHz treble frequency. Everything in the middle translates in to healthy voice, or mid range. The 105dB sensitivity hints to a relatively robust volume levels. This is all possible via two 50mm drivers (speakers) that have have 25mm magnets as well as 16mm voice coils. While the microphone often seems standard across most headsets, the Vengeance 2000 utilizes a high sensitivity condenser mic built in to the adjustable boom. It’s noise cancelling so background or ambient noises shouldn’t make it through the mic. Clarity naturally depends on the quality of the processing and your ability to enunciate. 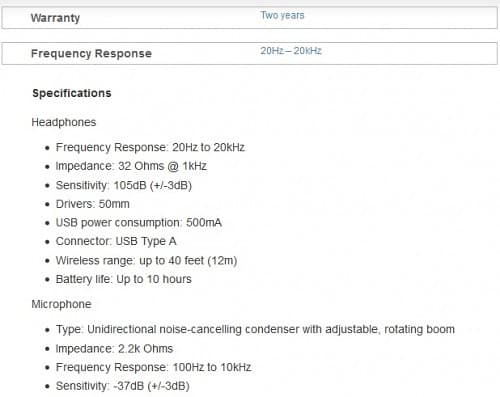 The headset wireless 2.4GHz signal range reaches up to 40 feet, or 12 meters. This is assuming you don’t have any walls or obstructions. Otherwise transmission distances will be much shorter. Maybe one of the more impressive features is that the headset should also be able to hold a charge up to 10 hours. We will find out if that turns out to be “mostly” true in our testing.

The CORSAIR Vengeance 2000 Wireless Gaming Headset retails for around $149 US at most major retailers. That makes it at least $50 more than its wired brother, the Vengeance 1500. Let’s see if the added convenience has any downsides. 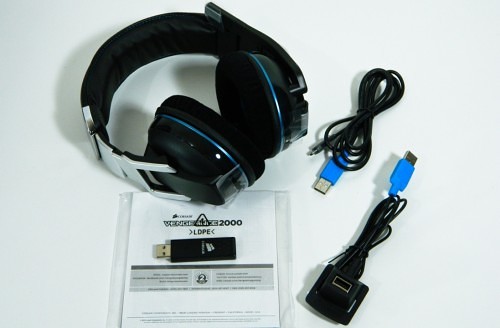 Inside your retail box is the headset, USB charging cable, USB patch cable with rubber base and wireless dongle. The charging cable has a Type-A female port on one end and mini Type-B male on the other. This isn’t as common of a cable as the mini Type-b 5pin. Keep this in mind if you need a new one, or go back to Corsair for a replacement. Software drivers can be downloaded directly from Corsair. 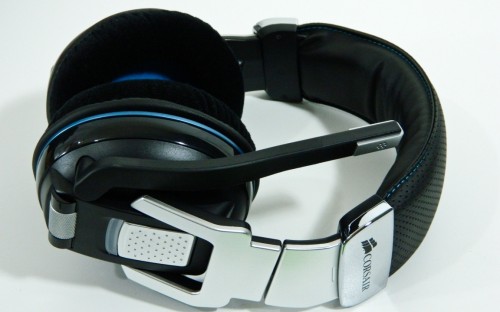 The V2000 are really nicely put together, especially up close. The design actually hides a couple more notable features. For example, the left ear cup contains the button needed to sync or re-sync the headset with the wireless adapter. Simply press the button which blinks blue and it’ll acquire the signal automatically. The same ear cup has a small aluminum thumb wheel which controls the volume. Overall, very cool implementation in this respect.

Looking over the headset in greater detail, it’s made from mainly rigid plastics that resemble brushed aluminum, making it quite attractive. Rotating and moving the headset reveals clean movement free of frame bending or contorting. The ear cups are attached to the head band via metal bushings of sorts. Four black screws on each ear piece make sure things grip tightly. Naturally, the head band extends rather than the cups themselves which is always a good design.

Each closed ear cup uses roughly 1″ thick memory foam for the best, secure fit around the ears and assist in noise isolation and direction of audio. They’re quite soft thanks to the material covering the memory foam. After about 10 minutes, they conform back to original shape. The cushioned head band uses the same foam and is covered with thin “fleather” (simulated or fake leather) material. Overall, the headset makes a plush, yet snug fit.

Let’s move on to see what the setup process is like then we can give you the goods on comfort and sound quality!