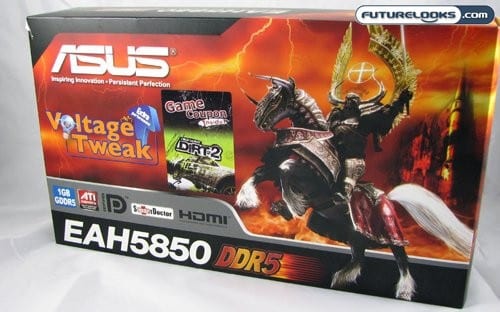 It’s that time again! A new video card chipset has been released, and like before we get to take a look at what this latest chip holds in store for our gaming and graphics pleasure. This time the chipset is being released from the labs at AMD.

Dubbed the ATI Radeon HD 5800 series, this newest piece of silicon comes in two flavours: The high end is represented by the 5870, and the mid-range the 5850, which is what we’re looking at today. This latest chip is supposed to support the new DirectX 11 features that will hopefully be fully exploited in Windows 7.

The folks over at ASUS thought it would be nice to throw a 5850 based card our way, but this isn’t any normal 5850. It supposedly has some tweaks that give it extra performance.

The ASUS EAH5850/G/2DIS/1GD5 Radeon HD 5850 video card may have a ridiculously large amount of letters and numbers in its product name, but it’s also supposed to have a up to a 38% performance boost thanks to the exclusive Voltage Tweak technology employed by ASUS. At first glance I’m sceptical as to how this works, as the specifications on the card are the same as the ATI reference specifications.

Full specifications for the ASUS card are of course available from the product home page, but here’s a quick run down of what you get.

Save for the Voltage Tweak technology, that overview could be echoed by any Radeon HD 5850 based card. The ASUS card is even priced in the same range at $299 USD from most retailers. So what exactly is it that sets this card apart? Or is it too early in the life of the 5850 to be able to set cards apart? We’ll have to find out in the following pages.

How About Fancy Packaging For Starters?

Actually ASUS did do one thing different with their 5850 that’s immediately apparent, and not something I normally talk about. They put that card in some fancy packaging. 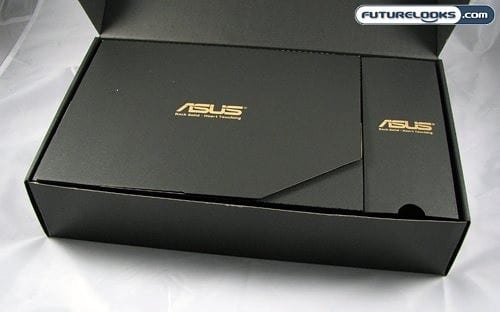 Rather than just putting video card in some protective foam, setting aside a box for extras, and tossing the paper work on top, they took an almost Apple-like approach to the packaging and presentation. The paperwork comes it’s own folder, and the accessories have their own covered box. The video card still comes in the same white foam we all know an love, but getting there is rather interesting. This opening the box user experience is very similar to what ASUS did with the Premium Essence STX Audio Card.

Hopefully the numbers posted by this card are just as inspired. 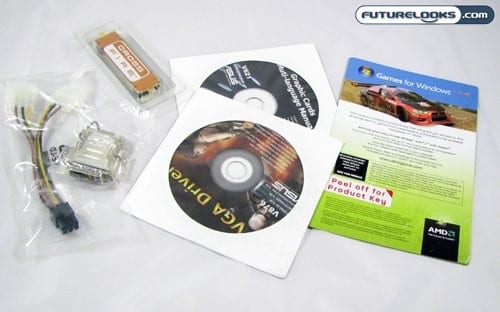 I’m know to lament the lack inclusion of some sort of game with the video cards I’ve reviewed. That being said I do understand the reason behind it; margins are slim and the companies need to maximize their returns as much as possible to be able to keep putting out products.

Needless to say I was rather happy to see a game included with the ASUS Radeon HD 5850 video card. It’s actually a bundle being released with many ATI Radeon HD 5850 cards, and the best part is it’s a very recent title. Actually it’s Colin McRae’s DiRT 2, which is so new it hasn’t been released yet. Activating the game does require creating or having a Steam account and installation of the Steam client. If you have a problem with that…well I simply can’t help you.

As for the rest of the accessories, they are pretty standard. There’s the usual drivers discs, a Molex-to-PCIe power adapter, a Crossfire bridge, and DVI-to-VGA convertor.